The Lübeck Dance of Death

The famous Lübeck dance of death was created by the young Bernt Notke in 1463 after the model of Danse Macabre in Paris from 1424/25 for the confessional chapel in the north of St. Mary's Church. This side, far from light, suggests the idea of ​​death and reminds man to arrange his life according to Christian doctrine through repentance, confession and penance. At that time one expected the plague spreading from the south, which Luebeck should actually reach at Easter 1464.
The dance of death was not painted on wooden boards, but on a 26m long and almost 2m high linen wall coverings, which stretched above the confessional stalls along the walls of the chapel as a continuous sequence of images. The frieze showed 24 nearly life-size couples, led by a flute-playing and a coffin-bearing death. They each consisted of a figure of death and one (still) living, from the pope and the emperor, to the mayor and merchant, to the farmer and the baby-child. The dance included representatives of all classes and included individual female characters and different ages. In the dance of death, the living joined only rigidly and reluctantly, on the other hand jumped the skeleton of the dead wild and boisterous. In the end, however, a sense-wielding death cut down all life.

A feature of Lübeck's Totentanz dance, which distinguishes him from all other traditional dance dances, is the fact that the macabre dance takes place directly in front of the local landscape with the representative city scenery of Lübeck in their midst. Thus, the viewer can identify with the figures in the dance and realize that here and now a mirror is held before his eyes, in which he sees himself in the dance with death. In the face of death, this proves the transience of power, wealth and beauty of this world.

Similarly artfully linked as the colorful picture sequence on the painting, below the figures the Low German text unfolded with the dialogue between the dead figures and the living. The dance of death here reminded the individual to orient his life on the one hand to the hereafter and the redemption and on the other hand to work for his personal task within the social community in this world.

The Death Dance of St. Mary's has in the St. Nicholas Church in Tallinn a 'sister piece', the Revaler Totentanz, the Bernt Notke made around 1500 after the model of his Lübeck death dance frieze. This fragment, also painted on canvas, forms the beginning of an originally complete dance of death with 13 figures. The dynamics of the figures and the luminosity of his colors still give an idea of ​​how expressive the old painting in Lübeck must have been.

The delicate wall covering of the Lübeck Frieze was frequently repaired over the years and was finally so worn out in 1701 that the entire painting was replaced by a copy by the church painter Anton Wortmann. At the same time, the deserved city poet Nathanael Schlott created a contemporary stylized re-enactment, which, just as in the old dance of the dead, came to the same place below the figures. The new verses conveyed a changed understanding of death; for the Baroque longing for death supplanted the joie de vivre and the fear of death and the Last Judgment, as it was characteristic of many figures of the late medieval work.

The Dance of Death of St. Mary has continued since its birth to the present day. This is evidenced by traditional and new forms of the art type, especially when wars, epidemics and other catastrophes evoke a sense of fear and powerlessness in the face of overpowering forces. Especially at such times people seek and find in the dance of death an expression for their existential basic mood.

During the Second World War, the Lübeck Death Dance was completely destroyed. Today, in the Totentanzkapelle, two recent artistic implementations keep alive the theme of death and the dance of death. On the one hand, there are the two towering Totentanzfenster by Alfred Mahlau on the north wall and on the other hand, it is the semicircular window of Markus Lüpertz above the north portal of the chapel. Mahlau designed his work in 1956/57 in memory of the destroyed frieze. He let himself be inspired by the old figures. As a memorial to the Second World War, he placed the death row over the burning houses and towers of the city of Lübeck. However, the painter, comforting, interprets this catastrophic scenario into a vision of peace; because he interprets the baby cradle at the end of the funeral procession as the Christ child in the manger, who overcomes death and raises the right hand to the blessing gesture. The statement culminates in the words "GLORIA IN EXCELSIS DEO. AMEN "(Glory to God in the high. Amen). - The window designed by Lüpertz in 2002 combines familiar Christian signs of death and resurrection: the fish symbolizing Christ, the skull in conversation with the dove of peace holding in the claws a blossoming red rose as a symbol of love and life, the blue one Jug with the water of life, the snail symbolizing death and rebirth, and the seven torches of the Apocalypse announcing the Last Judgment. Seen in this way, the picture window does not see itself as a vision of horror, but as a hope and comforting interpretation of death. 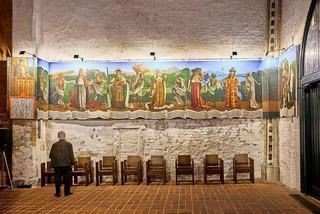 The lost Totentanz painting of the Marienkirche returns as beautiful music, moving visual art, inspiring readings, and the worldpremiere of a Totentanz animation-opera. The 1st. Europäische Totentanz Festival, September 24 till October 2 2021 in Lübeck.